Preface: As an academic philosopher, I’ve had the pleasure of interacting on multiple occasions with members of ‘the Rationalist Movement’, a contemporary community of thinkers interested in AI, cognitive science, and reasoning that has built up over the years around blogs like LessWrong, Overcoming Bias, and SlateStarCodex. As much as I admire the movement and even identify with it, I’m also conscious of some of its less constructive aspects. With this in mind (and fresh from a reading of CS Lewis’s masterful Screwtape Letters), I wrote the following short piece, with the goal of bringing out some of its dangers. 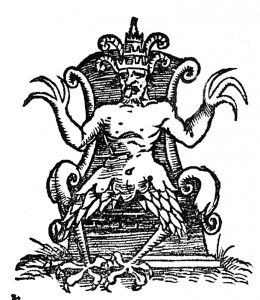 Your last missive robbed me of any residual trace of hope I might otherwise have had for the education of your generation of tempters. For once again, you have matters quite backward, fearing the most promising of signs in your patient and gloating over those you should regard as worrisome. And while Our Father Below approves of perversity in conduct, he forswears it entirely in the matter of judgment.

You say that your patient has become acquainted with the set known as “the Rationalists”. You gloat that his incipient atheism may become firmly fixed via this affiliation, yet fear that a dedication to truth and reason may lead him away from our influence. And you give little thought as to the more subtle sway this new set may have on his moral character.

Let us begin by deflating your hope that this new circle will secure his atheism and alienate him forever from the Enemy. As you are well aware, your patient was well on the way to godlessness – for that is the true mirror image of religion – well before you got your clutches on him. The fellow gave not the slightest thought to matters immaterial, and had not set foot in a church since his tender years. This is precisely the state in which it is desirable for us to keep a human: not believing, yet not making the slightest effort to find arguments for their non-belief.

Yet now, via this new acquaintance, he will find among his fellows many who are not merely godless but enthusiastic atheists. These rotten characters will spend hours upon hours genuinely reflecting on the arguments human philosophers have given for the Enemy’s existence. And while many of them will remain unmoved by these, there is always a risk some virulent particle of metaphysics will slip through. What if your man begins questioning the nature of consciousness, or the self, or the apparent contradictions in the everyday notion of time? Any of these lines of uncertainty could lead him dangerously close to the Enemy’s territory.

As for your fear that his new appreciation for truth and rationality somehow threatens our ultimate possession of his soul – this is similarly misguided, (what do they teach young tempters at school these days?). He may, to be sure, come to recognise a few of the worst habits of the human mind, but he is still a creature of flesh and blood, and can scarce avoid them entirely.

You are, of course, correct in asserting that falsehood and ignorance are not among the tools of the Enemy; His very nature is anathema to them. But it would be a mistake to therefore assume that Truth is always against us. As one of the human philosophers has noted, Truth is a many-faceted jewel, that shines now this way and now that in the light of reason. Even we cannot gaze upon it in its entirety, while mortals do well to catch even the most fleeting glimpse of it. Yet – absurd though it may seem to us – with a little prodding, they can be made to think they have seen a good deal of it; perhaps even all of it! From there, it is a short step to make them dismiss all opinions of others as founded upon Ignorance and Stupidity. And once thus snared, they are ours.

Indeed, there are even some particularly corrosive Truths to which you should, if possible, actively direct him. Social psychology might be a good place to start. There he will find ample evidence for the ultimately wicked nature of the human soul – its willingness to harm others in the name of authority, its eagerness to divide us from them, its apathy towards suffering. His new acquaintance with Rationality will make it hard for him to reject this evidence out of hand. But rather than engender humility or gratitude for the generally beneficent state of human civilization, it will lead him to an unconscious pride. No man believes himself truly wicked, and thus by convincing him of the wickedness of human beings, you serve to make him think that he alone is somehow immune to these moral failings that dog the rest of mankind.

If the opportunity arises, you might also direct him to the field the humans call psychometrics. I believe he has been educated in the Liberal Arts thus far. He will therefore believe that notions like IQ and intelligence are mere stuff and nonsense (he will called them ‘discredited’; our Department of Philology is to be congratulated for that invention). Yet if you can drive him to delve a little deeper into the matter, he might find some hard kernels of truth that, though initially uncomfortable for him, may soon flower into delightful blossoms of self-aggrandisement and contempt for his fellow men. Try though he might to recall the words of Paul that there is “neither Jew nor Greek, nor man nor woman, but all are one in Jesus”, I have found such notions of moral and spiritual equality prove flimsy in the face of ‘bell curves’ and ‘fluid g’.

As to his moral character more broadly – first, let me assuage any worries you might have that he will become one of those so-called ‘Effective Altruists’. Very few mortals truly have the stomach for it, and even among those that do, one may often discern hidden motives that provide us with material to work with. I will grant that there are a few foul beacons of light among them who are truly willing to devote their lives to the betterment of others. But such exemplars are rare, and – if I may be blunt – far beyond your ability as a corrupter. That you have made any headway with your patient thus far suggests that he is not such a man.

No, this new affiliation will likely work to our benefit. Foster his pride, his conceit, and his swelling sense of self-worth at his association with the Rationalists; kindle the first sparks of scorn for his former friends, and let him lament what he sees as their inability to weave cogent arguments or avoid quite elementary fallacies. With a little luck, he will soon despair of having meaningful or productive conversations with anyone not versed in the concepts and patois of his new-found tribe, robbing him of the kind of spontaneous human connection so congenial to the Enemy.

Still, do not let him avoid discussion entirely: direct conflict is vital for our attempts to ensnare him. But you should ensure that as many of his interactions as possible occur remotely, without the moderating influence of personal proximity. As for the subject matter, channel him towards politics and economics if you can. Let him pick a side and fulminate or sneer about intersectionality, virtue-signalling, social justice warriors, cis-privilege or whatever other fashions of the day seem most apt to goad him. Every knot of cultural grievance he threads is binding him further to us.

« The Trials of SalemoLITERALLY HITLER »