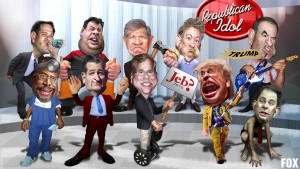 Even as a liberal, I found last night’s Republican debate terrifically entertaining. There were big personalities, some good zingers, and a moment of genuine eloquence and dignity from Carly Fiorina. Perhaps most impressively of all, given the relatively anodyne climate of modern politics, there were real disagreements among the candidates about policy – notably about the Iraq war and the Iranian nuclear deal. All in all, it was both enjoyable and substantial. I doubt I’ll enjoy the forthcoming Democratic debate half as much.

And yet I vehemently disagree with most of what the candidates stand for, whether it’s their angry nativism about immigration, their radical pro-life stances and total fury at Planned Parenthood, or their conviction that America needs to fight more wars in the Middle East. I guess that up to a point, that’s to be expected (I am a liberal, after all), but I do feel that the Republican party is in the intellectual doldrums right now.

While it’s tempting to feel pure tribal schadenfreude at the GOP’s sorry state, I think it’s a mistake to celebrate it. Instead, I think it’d be productive to ask: what sort of Republican party would I like to see? How could it usefully shape debates? What kind of thoughtful and constructive policies could it bring to the table? After all, even if the party is succumbing to its baser instincts right now, there are past Republican presidents whom I respect, and whose stances I admire – Teddy Roosevelt’s campaigns against special interests, Eisenhower’s unwillingness to play politics with the ‘missile gap’ and his prescient distrust of the “military-industrial complex“, and even Ronald Reagan’s optimism about America’s future. Similarly, there some strands of conservative thought I admire – a preference for incrementalism, for example.

With that in mind, here are a few simple suggestions for policy platforms that I think have real intellectual merit for liberals and conservatives alike (even if I don’t unqualifiedly agree with them) and which could also be natural Republican territory.

(1) A fairer free market and better antitrust laws. “If we will not endure a king as a political power, we should not endure a king over the production, transportation, and sale of any of the necessaries of life.” So said Republican Senator John Sherman in the 19th century. An ideological commitment to an efficient and fair free market seems like a natural conservative stance, but also something that’s of more general interest. There are many industries in America that are worryingly dominated by a small clutch of companies, including brewers, airlines, and cable companies. Tackling monopolies like these and beefing up anti-trust laws would be a popular and constructive line for the Republican party to take.

2) Campaign finance. In the wake of the Citizens United decision, and the fondness of billionaires for the GOP, it might seem perverse to suggest that reducing the influence of special interests in government would be an issue that conservatives would actually campaign on. But recall that the Bipartisan Campaign Reform Act (aka, the McCain-Feingold act) had broad cross-party support. Moreover, fair, transparent, and independent government, though important to people across the political spectrum, chimes very well with broader conservative ideology and historical concerns about business interests influencing politics.

(3) Cutting taxes on low earners. Cutting taxes is one of the most celebrated conservative policies. Jeb Bush’s plans to cut taxes would focus on the wealthiest Americans, an outrageous proposal given the soaring inequality in America. However, cutting taxes can certainly play in building a fairer society. In particular, reducing taxes on poorer families via expanding schemes like the Earned Income Tax Credit and raising personal and dependent exemptions can help achieve progressive goals and actually reduce inequality. Policies like this could be welcomed by liberal and conservatives alike.

(4) Cleaning up bureaucracy. One of the most common conservative talking points concerns “red tape” and the need to clear up bureaucracy and simply the tax code. Sometimes, this is just shorthand for cutting taxes across the board; but the U.S. tax code really IS a mess. The first time I, as a foreigner, filed taxes in the US, I was appalled by the amount of research and paperwork involved. America spends an estimated 6.1 billion hours and $163 billion filing taxes every year. A lot of this complexity comes from the sheer number of loopholes and exemptions that special interests have inserted over the years. That’s something that both parties, at least in theory, have an interest in clearing up. But building a simpler, less Byzantine government is a natural policy for a conservative movement.

(5) A less interventionist foreign policy. Despite George W.’s disastrous wars in Afghanistan and Iraq, the Republican party is still trapped in an aggressive, war-mongering mindset that regards American inaction on any geopolitical issue as tantamount to surrender, with Rand Paul the only prominent non-interventionist in the party (and who’s probably doomed as result). But things haven’t always been this way. Non-interventionism in its various forms has been an important strand in conservative and Republican thought in the last couple of centuries. William H. Seward, Republican Secretary of State under Lincoln and Johnson, voiced a long standing American and Republican principle when he refused to get involved in European wars, defending the “policy of non-intervention—straight, absolute, and peculiar as it may seem to other nations.” Non-interventionism is more relevant now for American politics than it’s been for a very long time. Granted, the nature of our globalized world and its multilateral institutions means that America can’t – and shouldn’t – duck out of responsibility for world affairs entirely. But there are very strong pragmatic and ethical arguments in favor of a diminished American role in the Middle East and a sharp curtailment of its drone program, which is currently involved in bombing at least six countries.

These are all conservative talking points that I think have real merit, and would improve the health of American political discourse. I’d be very happy to see a Republican movement that shifted to debates like these, even if it wouldn’t necessarily win my vote. (Not that I can vote in the first place, sadly. Although that does suggest policy (6) – votes for politically informed Brits living in America).

So now I ask the question to fellow liberals and independents – what sort of Republican party would you like to see. What conservative angles could be good for American politics?

« Do we have a moral obligation to host refugees?Three ways common sense gets biology wrong »