Is human extinction a real risk of climate change? 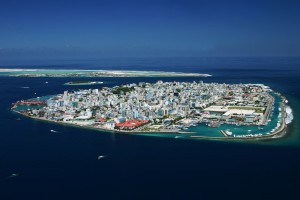 Humans are everywhere. We live in tundras, deserts, rainforests, and even New York City. We’re not the only animals that like to get around: red foxes, Argentine ants, and springtails are all examples of other species that inhabit huge swathes of the planet. Others, like the wonderful Iriomote cat or the beautiful and adorable vaquita (both critically endangered), are confined to very small regions.

It’s a natural thought that species with a wide geographical range are more resistant to extinction. It makes a certain kind of intuitive sense: if you live in a large area, then natural disasters, extreme weather, and fluctuations in other animal populations are less likely to affect you.

But according to a new paper in Nature Communications, the extinction-protection conferred by geographical range need not apply to catastrophic extinction events. More specifically, terrestrial vertebrates did not enjoy an advantage from geographical range in surviving the end-Triassic extinction event 200 million years ago (we don’t know what caused this extinction, by the way; volcanism, impact events, and climate change are all possible scenarios).

This is an extremely interesting result that gives us new insight into the mechanics of mass extinctions. However, this same finding is already being reported as further evidence that we’re all doomed; more specifically, that our wide geographical range won’t protect us from our own forthcoming climate change-driven extinction.

This kind of claim, that actual human extinction is a likely consequence of ongoing climate change (an insinuation that Noam Chomsky is also fond of making), seems to be becoming increasingly common. To my mind, though, it’s both scientifically dubious and ethically problematic. Consider the science first. There’s no question that climate change could cause huge numbers of deaths (it’s already doing so), devastate island countries, and cause a large number of animal and plant species to become extinct. It may even lead to a net decline in the human population. However, it’s hard to envisage a scenario in which climate change alone could kill us all. For example, note that mooted ‘runaway greenhouse effect’ that cursed Venus to lifelessness would probably require us to burn far more fossil fuels than actually exist on earth. Likewise, our planet has supported a rich biosphere at far higher global temperatures than are predicted even by highly pessimistic climate models. Of course, the biosphere had millions of years to adapt to those temperatures, and even then, a temperature spike at the early Eocene was very bad for marine life. But it’s still a far cry from the end of the world, or even the end of us.

First, it plays into the mindset that “we’re all doomed” – that the world is coming to an end, and it’s too late to do anything about it. This kind of millenarianism is intellectually seductive, and it can easily lead us to think that there’s no point taking action to curb climate change. However, in all likelihood, there will be plenty of us around who’ll have to deal with the severe consequences of a hotter, wetter, wilder climate, with reduced farming yields and diminished biodiversity. These are awful, concrete effects – more concrete and vivid, in fact, than inchoate eschatological sketches of our extinction.

The second reason extinction talk is ethically problematic is that it falsely suggests that the burden of a changing climate will fall equally on everyone (note the “all” in “we’re ALL doomed”). In fact, the consequences of climate change will fall disproportionately on the global poor. By focusing on doomsday scenarios, we create a false sense of solidarity, and distract ourselves from the very real injustice involved in the distribution of risks of climate change. This makes it easier to avoid awkward conversations – like the obligations of the global rich to help poor countries deal with climate change’s effects.

« Harassment, harm, and the social function of trollsVeganism and ideological compromise »